Set to receive a $100 million facelift, Brisbane’s iconic sporting arena the Gabba is about to go to market for the naming rights to the stadium, raising money for the proposed redevelopment. The word ‘Gabba’ is to remain in the title, with several options already put forward including the ‘Optus Gabba’, ‘Telstra Gabba’ and the ‘Suncorp Gabba’. Set to become the centrepiece of the 2032 Brisbane Olympic Games, the famous Queensland Sporting Grounds’ extensive revitalisation project will see its’ capacity grow from 42,000 to 50,000 patrons, elevating the arena to the number one cricket and AFL stadium in the world.

Although the exact amounts are yet to be confirmed, the Queensland Government will contribute some of the funds toward the design, while the private sector will be able to bid for individual projects within the redevelopment. The venture will incorporate the surrounding areas of the stadium in Brisbane’s once-industrial suburb of Woolloongabba, including the Cross-River Rail Project, an underground rail system that will run from Dutton Park to the RNA showgrounds. A pedestrian bridge from the Gabba Cross River Rail Station will connect directly with the main entry to the stadium, improving accessibility in a high-traffic area.

The Gabba Station precinct will comprise a mix of commercial and government offices, green space, residential apartments, restaurants and retail, inspiring a revitalisation of the entire inner-city area. Creating more than 100,000 new employment opportunities, Queensland’s largest infrastructure project in history is estimated to be completed by 2024, with services commencing in 2025. This will tie in with the timeline for the Gabba Stadium renovations, creating a vibrant hub only two kilometres from the Brisbane CBD, accessed via the underground transport service in as little as three minutes.

Construction will begin on the Gabba stadium upon completion of the Cross River Rail system, allowing plenty of time before the 2032 Olympic Games. The futuristic arena will feature ground-breaking technology, hosting the opening ceremony, track and field events and then finally the closing ceremony of the highly anticipated Olympic Games. The legacy project will complement existing sporting infrastructure including Suncorp Stadium, the Brisbane Entertainment Centre and the Queensland Tennis Centre, producing a world-class arena that will continue to be utilised by our sport-loving state for generations to come. 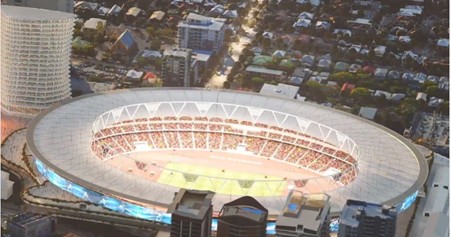